Tell us a little bit about yourself :)

My name is Tom, I'm 27 years young, born and raised in north London. I'm a yogi, gymnast and a general fitness fanatic loving pretty much all sports I come into contact with. I trained as an elite squad gymnast from the age of 5, training 27 hours a week with the dream of being in the Olympics. That all changed pretty quickly when Warner Brothers contacted my gym with the hope of finding 2 kids to fill the role of being Ron Weasly's stunt double in Harry Potter.  I was fortunately asked to audition and then even lucker to have got the part!

The whole experience was uniquely special and taught me so much at such a young age.  However, over the next few years of working on the Harry Potter films, my gymnastics training came to a huge halt, within 2 weeks of starting the films, I had already lost a significant amount of flexibility, and was no longer able to do box splits after only a month.

I finished the the films age 15, and continued a normal life back at school and attempting gymnastics. However, returning to the squad and seeing how much everyone had progressed was tough, they had surpassed me in strength, skill, power and endurance. I was certain I would never reach their level again.

I pretty much just didn't go back after that, I tried once or twice to see if I could still do a back handspring, which I could (like riding a bike) but that was it. I then finished school, did some traveling, and focused on work and earning money.

From 15-27 years old I had always maintained a healthy lifestyle, regularly going to the gym, primarily focusing my energy on weight training, something I love and still do to this day. There are disadvantages with weight training though such as injuries, which I have suffered with greathly over the last 6-7 years for example problems with my knees, shoulder, elbows... I won't bore you with that for now. So, the months where I couldn't lift weights I turned to yoga as it was the only form of exercise I could do at the time.

I have been doing yoga for the last 7 years of my life, its my go to when I'm not in a good place mentally or physically, its always been my safety net. I had always seen myself teaching yoga, but certain factors stopped me from pursuing this ambition. The money isn't great, it involves a lot of traveling and I have been afraid of not having a routine, and a reliable job that will always pay the bills. However, I have now come to realise that money and a high profile job in the city will not make me happy.

I decided this year to take a leap of faith and to pursue personal training and gymnastics coaching, which has been by far the best decision I've made. To top it off, I'm also traveling to India to complete a 500 RYT yoga teacher training, I leave in just 2 weeks!

How did you get introduced to gymnastics?

I first started gymnastics when I was 4 years old due to being such a hyper child and my mum seeing it as the only solution to calm me down. I was a hazard to myself - always climbing walls and trees and filipping myself around the garden.

When did gymnastics get “serious”?

When I was 5 for gymnastics as I was invited to squad and age 25 for yoga.

The biggest challenge this year was my press to handstand, I just never thought I'd be able to do it again. It took me around 7 months to get it back, but with persistence and flexibility training I found my press again!

How do you handle pressure?

I just crack on really, I moan and vent a lot to my friends, but I've learnt to realise there is nothing to be stressed about. Control what you can and ignore what you can't.

How did your passion influence your life in other ways?

My passion for sport, fitness and healthy living had to become a lifestyle change rather than a temporary fix.

I train in the gym 5-6 times a week, with strength, mobility and HIIT. I train gymnastics once a week, and yoga 4-5 times a week. I train lot, but I always make sure my body is recovered and I eat super well. I could do with getting some more sleep though.

And what about your flexibility training? Where does that fit in?

EVERYDAY!! There aren't any shortcuts here, it has to be done daily to really see and feel results. I always stretch at the beginning of every session for around 30 mins, focusing on splits and opening up my shoulders as they are my most stiff body parts. I also got my front splits (both legs) back this year, which was an immensely amazing feeling!

What keeps you motivated?

I truly love all the sports I do which is all the motivation I need, the only thing that grinds on me is the journey to the gym, the washing washing of gym gear and the constant showering. Other than that I fortunately stay motivated.

What are your future plans/goals/dreams?

To travel after my yoga teacher training in India and then I'm not sure of my plans for after that, but I obviously want to teach yoga ASAP.

Any tips for passionate gymnasts starting out?

Well for gymnastics you've got to find yourself a decent gym with a decent coach and train as much as possible. Especially when starting out you want to focus on flexibility and conditioning as without mastering that first gymnastics will never get easier. With yoga, it's a completely different journey, just go to as many classes as possible, and find a teacher(s) you really connect with. 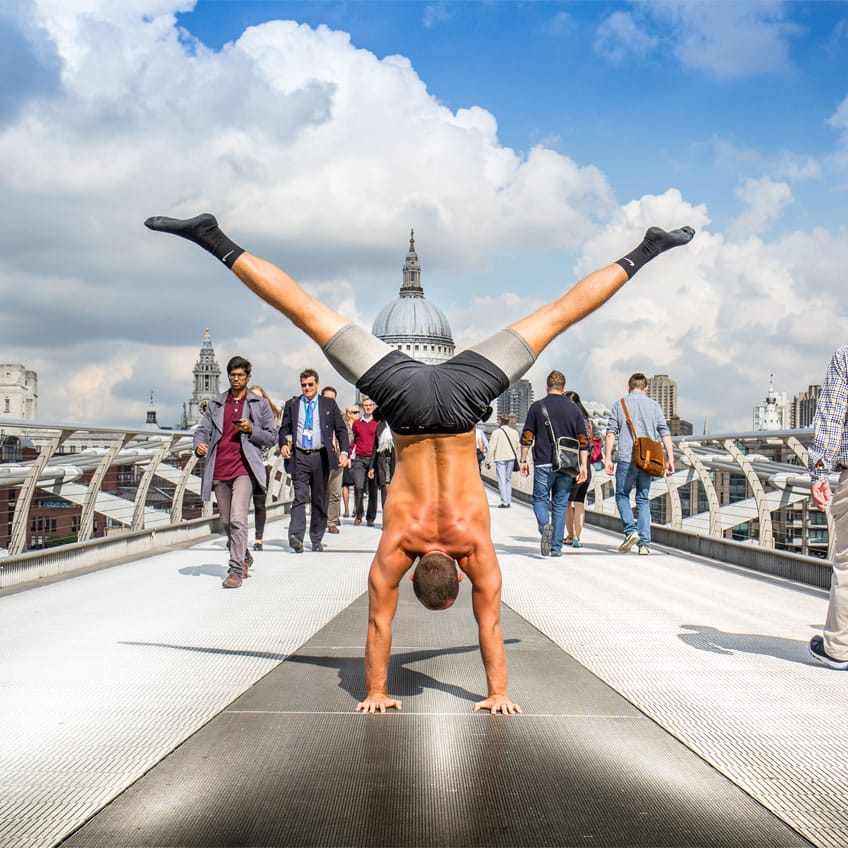 My name is Tom, I'm 27 years young, born and raised in north London.

← Back to My Journey